Five masters from the Antal–Lusztig Collection 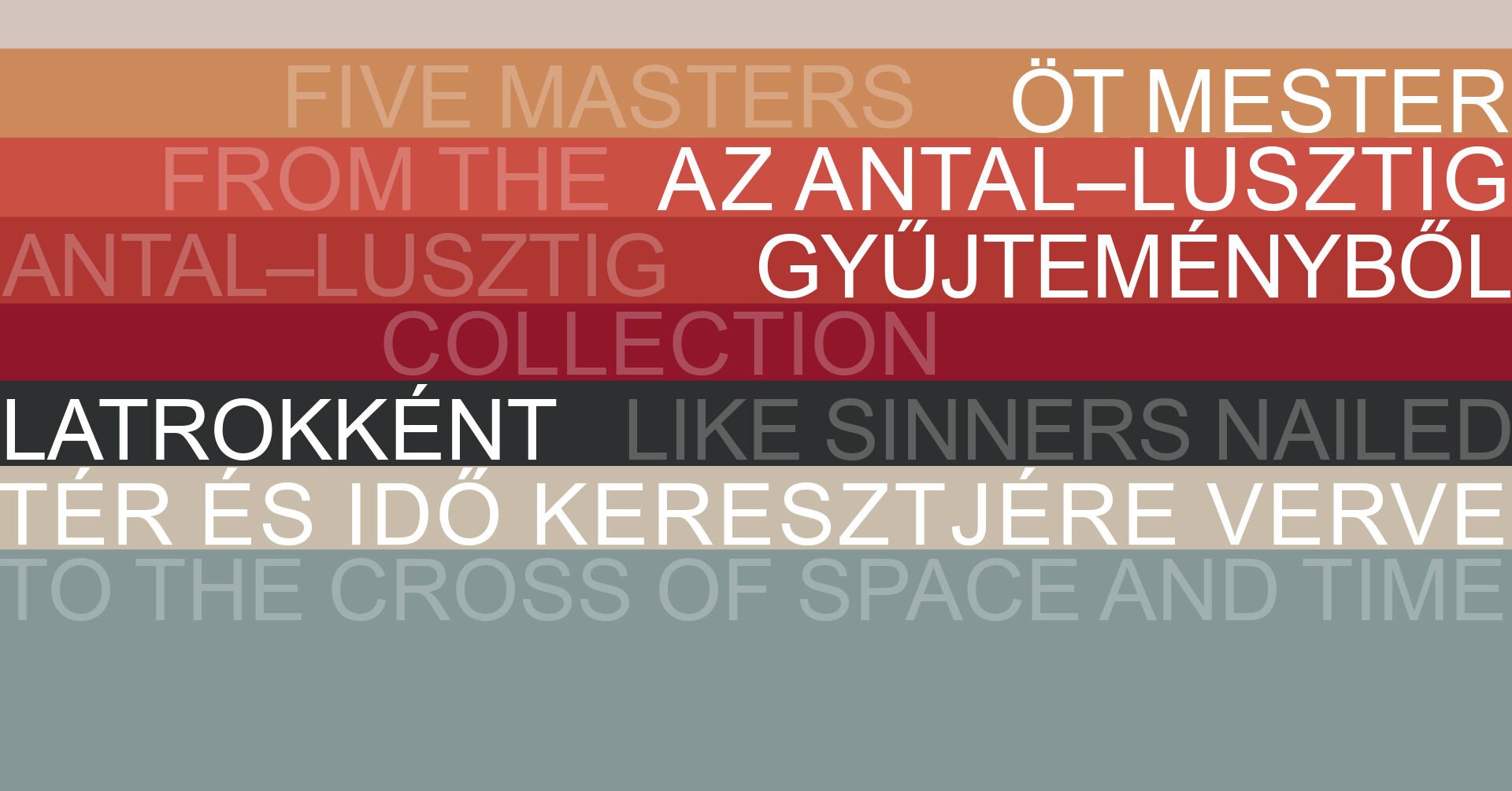 The third out of the planned five volumes of the series conceived to present the Antal–Lusztig Collection in Debrecen was published in 2021. The tome is devoted to five prominent masters of twentieth-century Hungarian art: Menyhért Tóth, Tibor Vilt, Erzsébet Schaár, Lili Ország and Béla Kondor. In the last fifty years significant works entered the collection from the oeuvres of the three painters and two sculptors.

The third volume features more than five hundred pieces by the five artists, of which a representative selection is published at this exhibition.

The title of the exhibition comes from János Pilinszky’s Details from a Diary, in which the poet quotes the French mystic and writer Simone Weil.

What day is it today? I live life
confusing the scheduled course
from time to time.
To borrow Simone Weil’s beautiful words,
“Like sinners, we, people,
are nailed to the Cross of space and time.

János Pilinszky’s existential experience and poetry share a close affinity with the approach taken to art and life by Erzsébet Schaár, Lili Ország and Béla Kondor. Several of Ország’s and Kondor’s exhibitions were opened by Pilinszky, and even a Schaár–Pilinszky album was published, titled Tér és kapcsolat (Space and Connection).

The works of the Menyhért Tóth collection faithfully follow the artist’s painting and sculptural oeuvre from compositions with an expressive palette to those of his white period. A distinct group is formed by Tóth’s mainly one-line drawings treating philosophical themes, which were assigned special emphasis at this exhibition.

In 2013 Péter Antal’s collection was augmented with the estate of the couple Tibor Vilt and Erzsébet Schaár, both of them sculptors, which also contains plaster sketches made for their various projects. These sketches had never been exhibited by the artists as they recorded interim phases of the creative process. Such sculptural pieces are typically destroyed over time; therefore, it is a special and rare opportunity for visitors to be able to ’peak behind the scenes’. These pieces and the photographs taken in the artists’ studios (Mária Sziklás – Schaár Studio, Imre Benkő – Vilt Studio) furnished the idea for a ’studio that never was’ to be built as part of this exhibition and displaying the sketches and sculpture fragments made by the two sculptors. The studio-room is not a reconstruction but seeks to evoke the atmosphere of their ’studios that were’.

Lili Ország’s art and Péter Antal’s ties to the artist and her works represent key moments in the collector’s life and the history of his collection. It was Lili Ország who introduced Péter Antal, a young lawyer at the time, to the Budapest art scene, and it was through her that he became acquainted with the Szentendre artists and many art collectors. The Lili Ország works in the Antal–Lusztig Collection comprise surrealist pieces, as well as compositions from her iconostas- and labyrinth periods.

The youngest artist in the selection is Béla Kondor, who appeared in the sky of Hungarian fine arts like a comet. Life allowed him one and a half decades to create his oeuvre. Very few Kondor works can be found in private collections since after his death the state purchased his estate for the Hungarian National Gallery. Péter Antal tirelessly searched for available pieces from Kondor’s oeuvre and managed to acquire numerous works, including outstanding graphic sheets and paintings. Kondor’s artistic world with its apocalyptic visions and mythical narrative faithfully reflects the zeitgeist and worldview that prevailed in Hungary after the Revolution of 1956 was quashed.

The editor of the volume and author of two of its chapters (Menyhért Tóth and Béla Kondor) is Katalin T. Nagy, the curator of this exhibition. The section on Erzsébet Schaár and Lili Ország were written by Mária Árvai, while the study on Tibor Vilt and the analyses of his works were penned by Emőke Bodonyi. The graphic designer of both this volume and the exhibition is Csilla Bogdán.

Films on the artists are screened in the video room located by the entrance to the exhibition space.