With the titular expression configured into a light installation, Benczúr Emese’s exhibition Let it be sets visitors on their way into the artist’s first exhibition in Debrecen, which offers a spectacular selection of her works from the last one and a half decades centering on the ambiguity of the shining, drawing attention on the dynamics among artist, spectator and artwork, as well as on some of the unavoidable phenomena of the social reality defining their status.

The Munkácsy Mihály Award-winning artist already as a painting major at the Hungarian Academy of Fine Arts gave up the traditional toolbox of the profession, thus joining those, who – as a consequence of the information boom and for more direct communication between artwork and spectator – gave up the monomedial easel painting approach.

Benczúr put previously conceptualized, repetitive first person singular writings that functioned additionally as titles in the center of her works. The era of the works made with artisan techniques, being aware of their outdatedness, but still protesting against mass production, from the end of the 90s shifted into a more experimental period concerning both the usage of the text and technical aspects.

This exhibition is organized by the light effects. The sparklingly waving surface for their touch, the light installations assembled from luminous elements, metallic-effect easel paintings – even without being figurative – evoke the star cult and the aesthetics of the social sites dominated by the obligation to shine. The writings several times put the visitor in the centre by addressing them; other times they refer to an aphorism – it depends on the spectator if they read it as didacticism or irony.

The works created by using earrings, Chinese flashers, recycled beer can lids and candy wrappers from a certain aspect can be connected to the tradition of arte povera (poor art), but they unequivocally extend beyond its characteristic anti-aesthetics with the permanence-emitting surfaces of the mass-produced objects.

What Benczúr at first achieved with the mantra-like repetition of the texts inside one artwork, recently has been realized by the continual returning to the writings, or by the repetition of the meditative series of actions serving the creation of the works. The light effects often crucial on the more recent works are to emphasize the diversified interpretation possibilities created in the relation between the text and the technical medium. As light does not refer only to the culture of shining, this seemingly immaterial phenomenon illuminates the material objects; furthermore, it is also one of the most fundamental sacral symbols. This exhibition urges visitors to search for the metaphysical light under the surface. 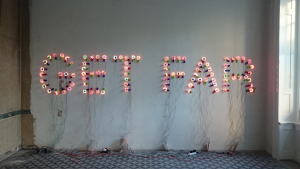